Barcelona forward Neymar has now told Paris Saint-Germain he wants to move to the Parc des Princes and agreed terms on a contract, a source close to the French club has told ESPN FC.

His decision means PSG can now push forward with their plans to trigger the Brazil international’s €222 million buyout clause.

The source said Neymar and his father, who has been in discussions with PSG’s ambitious Qatari owners and sporting director Antero Henrique for the past few days, have agreed to a massive contract at least four years in length.

If the 25-year-old ends up in Paris, he will be earning approximately €30m a year after taxes and will also be handed an astronomic signing on fee in excess of his net annual sum.

On top of those earnings and significant bonuses, the source indicated Neymar and his father will also profit from a number of club owners Oryx Qatar Sports Investments’ other commercial ventures in Paris and away from the world of football.

According to French newspaper Le Parisien, Barca’s No. 11 — who is currently in the United States with Ernesto Valverde’s men for preseason — has already told some of his current teammates that he is leaving for PSG. 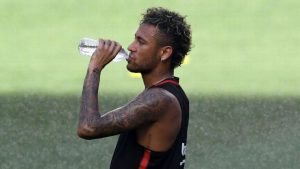 The ESPN FC source indicated that the biggest remaining question is no longer whether or not Neymar is willing to swap Camp Nou for Parc des Princes but how the capital outfit finance what would be a world-record fee.

PSG’s transfer budget at the start of the summer was €220m, all within the framework of UEFA’s financial fair play (FFP) rules.

However, after the signings of Dani Alves and Yuri Berchiche, the French club’s ability to finance Neymar’s proposed salary has been questioned.

Although the sale of Jean-Kevin Augustin effectively cancelled out the signatures of Alves and Berchiche in terms of transfer fees — €13m spent and then recouped — players including Serge Aurier, Hatem Ben Arfa, Grzegorz Krychowiak need to be moved on to create sufficient space on the wage bill.

According to the source, a number of methods to complete the Neymar deal are being considered, with almost all of them concerning third parties — notably player and club sponsors Nike. The club know that when they make their move, they must meet the player’s release clause.

If successful, though, PSG’s summer business would not end there. Arsenal’s Alexis Sanchez remains a target, while the defence could be boosted by Estudiantes’ Juan Foyth, and Henrique is still very keen on luring Monaco’s Fabinho to Paris to restructure the midfield.

RB Leipzig have told Liverpool that Naby Keita is not for sale at any price after turning down a €68 million bid last week, a source has told ESPN FC.

Earlier this summer, German media had quoted an unofficial price tag of €80m (£70m) for Keita and Liverpool are reported to be planning to meet that valuation, but Leipzig insist that there is “no figure” that could sway their minds on the 22-year-old Guinea international.

“We will not enter into negotiations at all,” a club source told ESPN FC. “A decision has been made that none of our key players will be sold and we’re sticking to it.”

RB sporting director Ralf Rangnick is determined that Leipzig give a good account of themselves in the Champions League and challenge Bayern Munich for the Bundesliga in the coming season.

The club’s head coach, Ralph Hasenhuttl, has said Keita and Emil Forsberg “feel great” at the Bundesliga club despite continued speculation over their futures.

“You can see that they feel great here and are looking forward to the new season,” Hasenhuttl told kicker after the pair returned to training. “They know very well what they have here.

“It’s a huge compliment for us that we awoke such desires, but it’s not the general idea of our path to allow players a transfer following the first available offer. Our goal is to become a big and established club, and what we did this summer is a substantial step towards it.”

Privately, Leipzig are aware that Keita’s representative may to attempt a final push for a move in coming weeks, but last season’s Bundesliga runners-up remain determined to rebuff any further approaches.

Keita, however, might yet become a Liverpool player in 2018 as a release clause in his contract would allow him to leave in 12 months’ time for €55m.

However, kicker reported Forsberg has no such clause in his deal, which he only signed in February.

Diego Costa is making the most of his extended summer break in his hometown in Brazil — by enjoying a street party in an Atletico Madrid shirt.

The 28-year-old has made it clear that he wants to return to his former club this summer after Antonio Conte informed him via text message that he was not wanted at Stamford Bridge next season, and he has been excused from joining the rest of the Chelsea squad on a preseason trip to China and Singapore.

While his Blues teammates are navigating a gruelling schedule of double training sessions at Cobham, Costa has remained in Lagarto — the small town where he was born and raised and where he is adored as a hero — keeping fans updated on his activities with regular videos on his Instagram account.

Lengthy footage posted on Sunday showed Costa filming a street party featuring a live band, attempting to play the drums and mingling with fellow revellers (several of whom are wearing Atletico shirts with his name on the back) before donning one himself and posing for the camera.

Earlier in the video, Costa engaged in a public text exchange with Chelsea teammate Cesc Fabregas in which he posted, “Dale un abrazo a conte,” which translates to “give Conte a hug.”

It doesn’t seem as though Costa holds any grudges towards his head coach for that infamous text message earlier this summer, but it’s now a question of when rather than if he returns to his beloved Atletico.